skip to main | skip to sidebar

On December 18, The Sydney Morning Herald reported that 'the NSW Land and Environment Court has upheld a decision by the state’s Independent Planning Commission to reject a controversial coal mine planned for rich farmland north-west of Sydney', in the Bylong Valley. 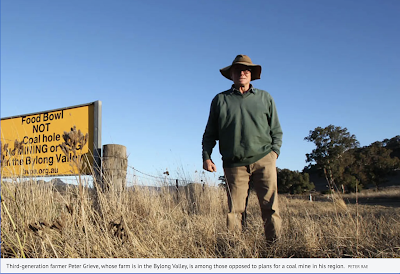 Posted by WRV Artists' Project at 1:32 AM No comments:

While We Sleep open till 30 July

Our process is to familiarise ourselves with places under threat across New South Wales by being observer-supporters of activist campaigns underway to protect them. We use these as 'research residencies' for exhibitions and publishing that use the witnessing role of art to draw public and art-world attention to environmental debates and to the remarkable work of front-line activists. The events and campaigns that we have attended or in which we have participated in this way, are posted on this blog. After the community campaign against the Tillegra Dam was won by community activism in 2010, we moved on to the threat of coal and CSG mining, especially in the Bylong valley, the Leard State Forest and Bulga. This blog documents the exhibitions and publications that we have produced through this process.